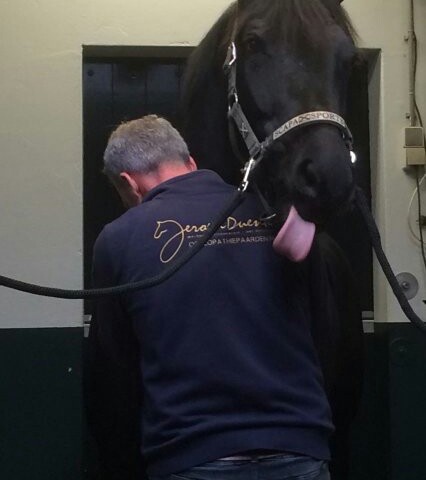 The whole body is connected to each other, that’s why reactions can be seen on the other side of the body from where I’m manipulating. The tongue is an important part of the body as it’s indirectly connected to the jaw joint … perhaps the most important joint of the entire horse

In addition, the tongue is connected to both shoulders by a muscle connection, but also to the sternum, where the girth lies. So breathing also has an effect on the tongue, and vice versa.

The tongue also has a lot of influence on its musculoskeletal system through the sternum, which is part of the C7-T1 spinal segment, even through multiple compensations, on his hindquarters including the SI joint.

Also the entire neck, the position of the saddle (does it slide to the left, right, front or back?), girth problems can all have a connection with the tongue.

That’s why the tongue always tells you something!